Boca Raton, Florida, October 6, 2022 — McapMediaWire – Universal Media Group Inc. (OTC Pink: UMGP) has recently entered into the first of what is expected to be multiple project collaborations with Larry Kasanoff and Threshold Entertainment. The new project will be a Reality TV show based on Miami’s South Beach, focused on the lives of GenZ social media influencers with an array of celebrities involved with the project. In addition to the uniqueness of the new franchise, our blockchain partnership with NFTware.io will provide never-before-seen audience interaction with the show. 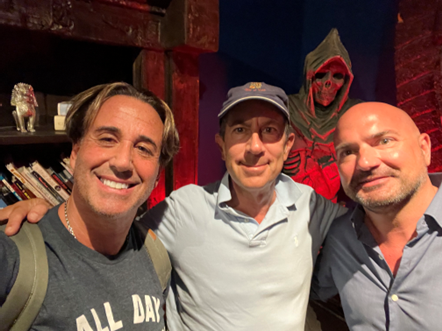 “With the pilot development underway and scheduled to be shot this fall and full production next spring, we are targeting fall 2023 for mass distribution”. -Rourke Smith, Associate Producer

“Universal Media has been more active than ever, creating many new opportunities to grow our business. This collaboration with Larry Kasanoff and Threshold Entertainment is the start of a relationship that will again showcase Larry’s extraordinary talents and add to an ever-growing content collection for Universal Media. We have always been cognizant to preserve and grow the value for our UMGP shareholders, and this is another step in that direction.” -Mike Sherman, Executive Producer & CEO of Universal Media.

Under the Threshold Entertainment Group banner, Kasanoff oversees the company’s subsidiaries which include Threshold Entertainment, Threshold Animation Studios, and Blackbelt TV. As a producer or studio head, Kasanoff has raised well over a billion dollars in the film business. He and his executive team have been instrumental in producing over 250 feature films, including Terminator 2: Judgment Day, Mortal Kombat, True Lies, Dirty Dancing, and the Academy Award® winning Best Picture, Platoon. Threshold Entertainment makes movies, animated movies, and Location-Based Entertainment (LBE) primarily based on some of the world’s biggest brands, including Spider-Man, Justice League, LEGO, Star Trek, and Star Wars. Threshold’s most recent film for Universal Studios is the CGI-animated Bobbleheads: The Movie, starring Cher. Threshold has been awarded close to 100 Gold and Platinum Records, including Guns ‘N Roses and Pink Floyd.

About Universal Media Group
UMGP is a digital media company with multiple revenue verticals including “Before the Fame”, “On the Mike”, “The Session Man”, “High School Icon”, “Suga & Sherm Podcast”, and partnered with a new Web3 NFT Launch & Management platform created and managed by the team at NFTware.io  UMGP attracts some of the brightest stars in music, film, sports and social media to participate in our programming including Jamie Fox, Rashad Evans, DJ Khaled, Mike Tyson and many more. www.umediagroupinc.com