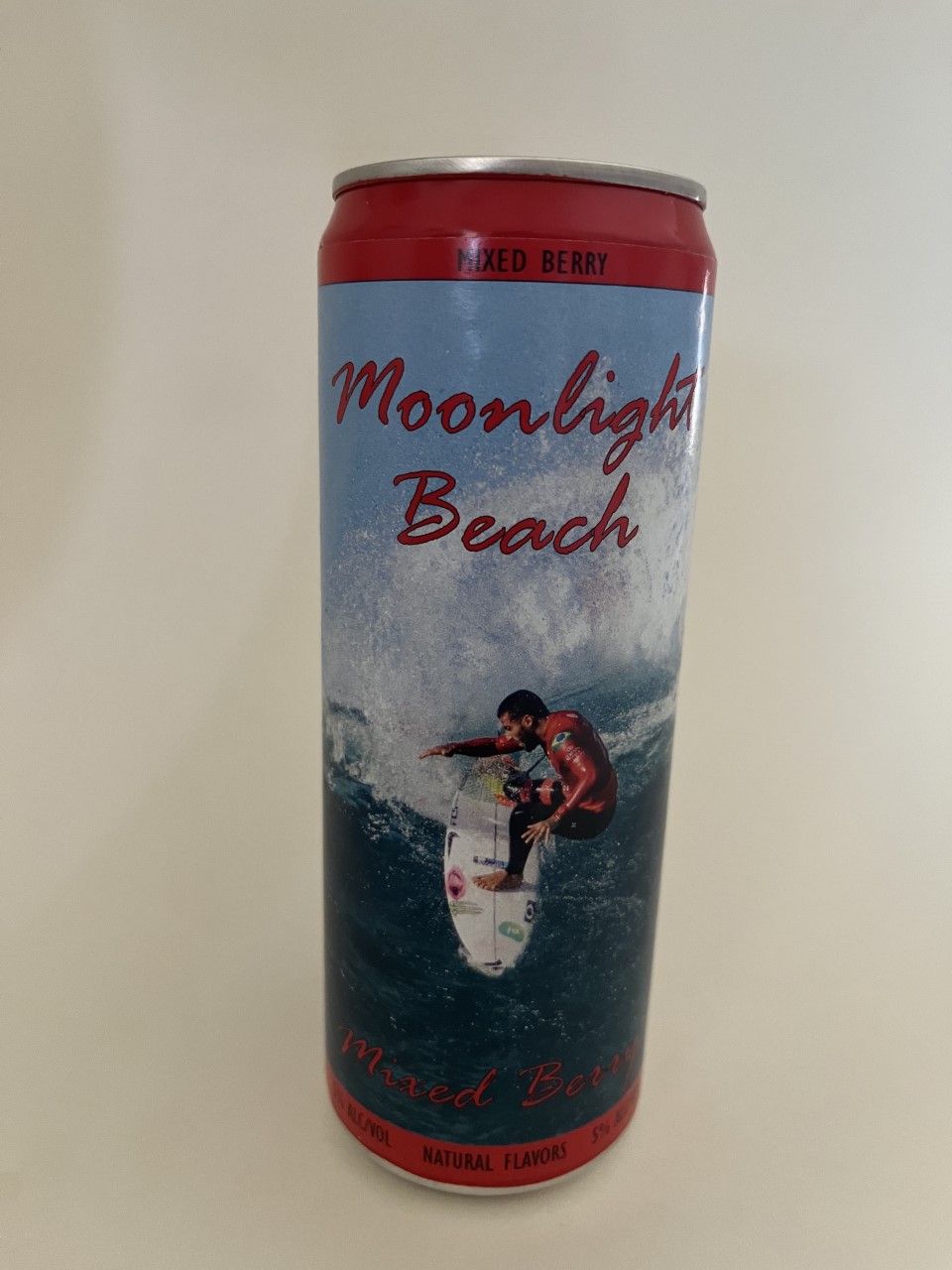 Moonlight Beach Cooler will be offered in three (3) outstanding and all-natural flavors: Mixed Berry (with a bright red background), Tropical Citrus (with a lime green background) and Luau Fruit (with an orange-yellow background). The colorful 12oz slim can features thrilling beach and surf scenes with vibrant colors that excite the senses and portray an image of adventure. Moonlight Beach Cooler will feature flavors that are much bolder than what is currently available in the marketplace.
Although each offering contains full and vivid flavors, each 12oz can only contains 100 calories with 5% alcohol making it the perfect product for an active lifestyle.

In the late 1970’s, and into the 1980’s, a brand called California Cooler invented a category referred to as “Wine Cooler”. This category grew rapidly with offerings from Seagram’s and Bartle’s and James among others. The category expanded throughout the 1980’s and 1990’s. The advent of the Micro-Brewery explosion made the wine cooler category obsolete. Opponents of the wine cooler market criticized the sweetness, the added sugars and the expansive calories in each offering.
With the arrival of the 21st Century, the next evolution of Flavored Malt Beverages arrived like a thunderbolt. That explosion is called “Hard Seltzers”. Hard Seltzers have become a category generating multi-billions of dollars in revenues. Hard Seltzers have gained acceptance from population bases in every demographic. Male, female, young, older, urban and rural consumers have accepted the offerings as a welcomed alternative the heavy beers and high alcohol spirits. The only criticism that market groups consistently receive about the Seltzer market is the lack of flavor.

V Group believes it’s time to reinvent the Flavored Malt Beverage Market again! V Group, with this new acquisition, is creating a new category called the “Beach Cooler”! This new category combines the full flavor of the wine coolers of the 80’s and 90’s with the low-calorie crispness of the 21st century.

V Group has contracted with a brewery located in Southern California that is capable of canning the unique formulation of Moonlight Beach Cooler. The first production is scheduled for the second week of August 2022 with additional productions available as needed. The initial production will consist of 20 pallets of finished product. Moonlight Beach Cooler will be packaged in a 12-pack case. Each 12-pack case will contain all three exceptional flavors known as a “Variety Pack”. The entire first production has already been sold to a well-known grocery chain willing to promote the brand. The National launch of Moonlight Beach Cooler will take place at The National Association of Convenience Stores (NACS) trade show in Las Vegas NV, October 2-4, 2022.

Moonlight Beach Cooler is currently in discussions with a major network of beer brands to expand distribution domestically quickly in 2023. V Group, Inc. expects the brand to expand and grow rapidly for 24 months. Projections for revenue and earnings for 2023 will be calculated after the initial production and National launch of the brand.

V Group invites the public to follow us on Twitter at VGroup20. All updates will be released through Twitter going forward. V Group is currently re-engineering the Company Website to reflect Moonlight Beach Cooler. Moonlight Beach Cooler will be creating a web presence and a social media platform over the next 30 days.

Forward-Looking Statement Any statements made in this press release which are not historical facts contain certain forward-looking statements; as such term is defined in the Private Security Litigation Reform Act of 1995, concerning potential developments affecting the business, prospects, financial condition and other aspects of the company to which this release pertains. The actual results of the specific items described in this release, and the company’s operations generally, may differ materially from what is projected in such forward-looking statements. The company disclaims any obligation to update information contained in any forward-looking statement. This press release shall not be deemed a general solicitation.